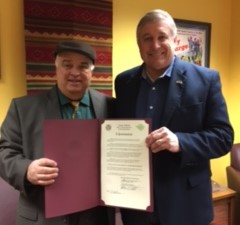 Today we are pleased to express our appreciation to the Commissioners of Berks County as County Commissioner, Christian Y. Leinbach provides Paul Stengle with a county proclamation affirming March as Developmental Disabilities Awareness Month.

The Arc movement is banding together with its 700+ network of chapters across the nation to mark Developmental Disability (DD) Awareness Month in March.  Powered by the energy of self-advocates, families and volunteers around the country, the month will commemorate the progress toward improving the lives of people with intellectual and developmental disabilities (I/DD) and stress the challenges that remain in achieving full inclusion for people with I/DD.

Nearly a quarter century ago, it was The Arc’s advocacy that spurred President Ronald Reagan to officially proclaim March to be Developmental Disabilities Awareness Month.  In bringing I/DD to the forefront, the proclamation underscores the pride and the promise of people with I/DD in achieving the same dreams of every American.

The presidential proclamation states, “For many of these people with developmental disabilities there is now the prospect of a brighter future and greater opportunity.  Americans are becoming increasingly aware that such disabilities need not keep individuals from realizing their full potential in school, at work or at home, as members of their families and of their communities.”

Through increased awareness and further education of legislators and the general public, opportunities for persons with I/DD have come a long way since children were warehoused in institutions with no future or a real education. One giant leap forward was the enactment of the Individuals with Disabilities Education Act (IDEA) in 1975, which for the first time required schools to educate all students with disabilities—including students with I/DD. This monumental Act was predicated upon two Federal Court cases, The Arc of Pennsylvania (formerly Pennsylvania Association for Retarded Children) v. Commonwealth of Pennsylvania 1971 and Mills v District of Columbia Board of Education 1972

The Arc Alliance has been active in the formation of the disabilities landscape for over 66 years, working on landmark decisions, Acts and Amendments ensuring valued life experiences and treatment expected by all people.

We invite you to join with us as we continue the work of raising our communities awareness and appreciation of the strengths and abilities of those we support.